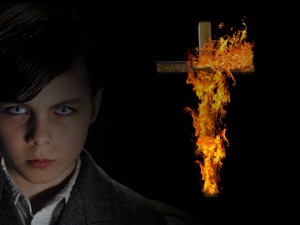 Let’s talk about the Antichrist. For some the term Antichrist is said to be a man possessed by Satan himself who will oppose Christ directly during the end days. The general populace will supposedly adore him, many will proclaim him to be God as he deceives as many souls as possible into following him to hell. Scary right? What comes to mind for me are thoughts of the end of the world, the final battle between good and evil, the last judgment, separation of the good sheep from the goats, Heaven, Hell…all that stuff. For me, it’s the ultimate topic in scary. (Of course, as a believer, anything that concerns the devil should scare us.)

But what do we really know of the Antichrist? Is he to be a person? Or is it really more of a concept or a representation of evil in the world? The following piece is meant only to glance over the history of the term and what early Christians wrote about it.

Throughout the centuries, churches and theologians have disagreed as to just who or what the Antichrist is or represents. Jesuit priest, Michael Gruenthaner examined the question in his essay, “The Antichrist in Scriptures” written in 1942. He wrote that the term Antichrist, which is first mentioned in John’s epistles, was used both in the plural, representing evil at large, and in the singular, representing one person expected to come at the end of the world in direct opposition to Christ. He also found that all early church fathers “borrowed the term to designate an individual human adversary of Christ, of unequalled malevolence, who is to come at the end of time”  Gruenthaner goes into great depth reaching into the Old and New Testament, as well as the early writings of Church fathers, and I highly recommend the read for any who want a balanced look at the topic. His conclusion is all I will give here.

“This investigation, therefore, seems to show that the so-called bugbear of an individual Antichrist has not been banned or relegated to a subordinate position as was thought in some quarters. His advent is certainly taught by St. Paul and probably predicted by Ezechiel. St. John recognizes it as an accepted part of early Christian teaching.”  (http://www.catholicculture.org/culture/library/view.cfm?recnum=7705)

This conclusion seems verified by the Didache or the Teaching of the Twelve Apostles. The Didache, which means teaching, is a short discourse by early Christians written somewhere around 70 A. D. The Didache had this to say of the end times.

“ For in the last days false prophets and corrupters shall be multiplied, and sheep shall be turned into wolves . . . and then shall the deceiver of the world appear, pretending to be the Son of God, and he shall do signs and wonders, and the earth shall be delivered into his hands” (Didache16:3-4).

That certainly sounds like a someone, doesn’t it? However, there are those modern thinkers who bring up passages in the Gospel and New Testament that would seem to contradict the idea of the Antichrist as a single person. Here is what Saint John says in the Gospel:

“This is how you can recognize the Spirit of God: Every spirit that acknowledges that Jesus Christ has come in the flesh is from God, but every spirit that does not acknowledge Jesus is not from God. This is the spirit of the Antichrist, which you have heard is coming and even now is already in the world.”1 John 4:2-3

This school of thought begs the question if the Antichrist were one being, would Saint John have put it quite this way?

But let’s return to the early church writings, where we find Polycarp, an early Church father, who seems to have personified John’s Antichrist in this passage from a letter he wrote to the Philadelphians 7:1 in A.D. 135. “Whoever does not confess the testimony of the cross is of the devil; and whoever perverts the sayings of the Lord for his own desires, and says that there is neither resurrection nor judgment, such a one is the firstborn of Satan.”

Another example is found in the writing of  Irenaeus, a Greek Bishop who confirmed the Gospel of John and of Luke were indeed written by St. John and St. Luke respectively. Writing in A.D. 189, he had much to say in his discourse,  “Against Heresies,” ending with this gem:  “But when this Antichrist shall have devastated all things in this world, he will reign for three years and six months and will sit in the temple at Jerusalem; and then the Lord will come from heaven in the clouds, in the glory of the Father, sending this man and those who follow him into the lake of fire” (5:30:4). Now that sounds specific and very much like Satan on a throne – insert shiver here.

A few years later in 200 A.D.,  Hippolytus, an early theologian, had some equally scary specifics about who the Antichrist would be saying the deceiver (or Antichrist) will liken himself to Christ in all things. So if Christ is a lion, he will appear as a lion. Christ was a king, so the Antichrist will also be a king. Jesus was the “Lamb of God” so the Antichrist will seem to be a lamb on the outside but be a wolf within. And even more specific, Hippolytus claims the Antichrist will come from the Jewish race and Jerusalem: “ The Savior came into the world in the circumcision, and he will come in the same manner. . . . The Savior raised up and showed his holy flesh like a temple, and he [the Antichrist] will raise a temple of stone in Jerusalem.” (The Antichrist 6) (Although his view was likely slanted by a prevailing prejudice against the Jews because of anger over the crucifixion.)

It’s all so chilling isn’t it? We could go on giving more examples from 200 to 400 A.D. specifically Tertullian, Cyprian, Lactantius, Cyril, and Augustine,  but you can have fun looking those up yourself, if you’re into that. The final point for me I guess is to wonder that since all these early Church writers believed in a flesh and blood type Antichrist, if perhaps we should too.

But whether you do or you don’t, I hope you will still enjoy reading fiction books such as mine that hint at the epic battle to come and even benefit from an occasional thought of your own last end that reading such stories might evoke. If you haven’t yet, catch up on The Glen Series.

The Glen Book I

Back to the Glen Book II

4 Responses to Antichrist: Real or Fiction?