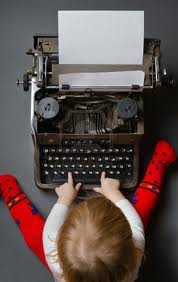 As far back as I can remember, I have had words running wild in my head. I began spilling them on paper as soon as I could write. When I was seven, my dad let me use his old mechanical typewriter, a Remington monster in a huge grey metal case that weighed more than I did. It was painstaking work. Pushing hard to depress the keys, unsticking  them when two or three decided to kiss down at once, manually slinging the carriage return at the sound of the bell. Two sore fingers diligently tapped out words at a rate of half a page for half a days work, at best. I was and remain a horrible typist. It was excuseable at seven, decades later, not so much.

I was visiting my best friend in Albany recently, and she had occassion to observe my typing as we multitasked on her couch catching a movie, sipping drinks and working on our laptops. She was flabbergasted watching me mess up and hit the backspace key more often than any other key.

“Carla, didn’t you ever learn to type?” she asked. I told her no, and she responded laughing, “Well that explains a lot.” She reminded me of many a late night email ( I don’t backspace as often after ten) filled with typos. I remember once, I had a deadline–in my head, anyway–and she replied to an email with a stern warning, “You better not be working on your book!”

Anyway, I’m faster than when I was seven, and I thank God for the backspace and delete keys. My dad had this strange pencil with an ink type eraser on top and a fan thingy on the bottom. When you hit a wrong key, you had to lift the metal bar, roll your paper up a bit, try to scrub the ink, and then get your key back where it belonged and re-type. Needless to say my paper was filled with holes, and xxx’s where I gave up and would begin again in a clean spot. Eventually, Pop’s old typewriter was replaced with a state of the art IBM Selectric. Ooo, lighterweight, although still heavy for me. It had keys a little more like we have today, which depressed effortlessly rolling a metal ball of letters over a ribbon of ink. It even had a white ribbon for…, wait for it, corrections. Unfortunately for me, the white ribbon never seemed to be replaced, and I was still in the roll-and-manual-erase mode, but white-out was around the corner.

Buried in our attic somewhere are those early ramblings. I’ve thought a hundred times of digging them out and seeing just what a seven year old me thought was so important, she would give up hours and hours of fun with siblings and neighborhood kids and Brady Bunch episodes to commit it to paper.

Well, that sounds like fodder for another post. Have a great day and if nothing else, those of you who remember how typing used to be can thank God for computers and laptops, or just smile at the memory, cause nothing felt quite the same as a typewriter under your fingertips.

One Response to Early Efforts