Ending with a Preposition: Oh, the Horror! 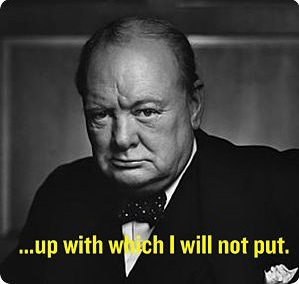 My daughter, who is gaining her degree at Eastern Michigan University and majoring in English, finished The Glen recently. As a service to me, she penciled in a few thoughts and noted typos. All were relatively minor, a few missing words, misspellings, misplaced commas, extra spaces, and things of that sort. True to the teaching profession, which she is shortly to join, she dilligently pointed out each and every instance of a sentence ending with (try to control your shock) a preposition. Without mercy or exception, she applied the “never end a sentence with a preposition” rule stringently. Now, I know she didn’t learn that rule from me, as she was home-schooled through high school, and I assumed it to have been drilled into her since attending college. I was mistaken, however and later found she has always adhered to this rule, and we disagree entirely over its usefulness.

It is apparent, to me anyway, why the rule doesn’t fly and should not be strictly applied in fiction; people don’t talk that way, plain and simple. Try it out: Who are you going to the dance with? versus, With whom are you going to the dance? Or how about: He looked for something to stand on, versus, He looked for something on which to stand. Grammarians may still cry for the latter of each version but why?

Fiction must be real, believable, and above all else, it should draw the reader into the story. Obviously in dialogue, we expect the characters to speak naturally, (sans the endless, uh, ums, and the like.) But even in narration, a natural sounding voice is important. Most fiction today is written in close third person or first person. In these cases, narration is supposed to sound as if it were coming from the character and in their voice.  The author’s goal is to place the reader in the character’s head and allow them to see the story through their eyes. Now, how fast will a reader be jerked out of the story hearing phrases like: She asked from where he came, or He wondered from where she was coming, or This is the kind of thing of which I will not put, or There is nothing of which to be frightened.

Of course, there are times when rewording to avoid ending in a preposition will not kill the story or voice and may even make a stronger sentence. Yet, there are other times when rewording for the sake of the sacred rule will kill the emphasis, tone, or even the clear meaning of the sentence. The problem is not necessarily the rule, so much as the expected lockstep adherence to it. I wondered why we continue to hold on to this archaic rule and from where it came. (Big grin.)

The origins of the edict hail from Latin grammar rules which state every preposition must precede it’s object. However, Latin is nothing like English, especially as pertains to parts of speech and their positioning in a sentence. Making English conform to Latin rules is like placing a square block in a round hole; it’s simply not a good fit.

Supposedly, it was John Dryden, a 17th-century poet, who first barked the dogma that a sentence must not end in a preposition. Teachers and grammarians soon took up the cry and have been beating students over the head with it ever since. Despite this, there has been continual disagreement over the ungainly dictum as far back as 1902 by well-respected experts of the English language, who recognized the practice as both idiomatic and common, even natural.

Well, count me in. (Another big grin.) I for one will end my sentences as I see fit, aiming for clarity, meaning and effect. I see the rules of grammer as guides to enhancing our universal understanding of the written word, not as syntax straight-jackets to fit into. (One last grin.)

5 Responses to Ending with a Preposition: Oh, the Horror!